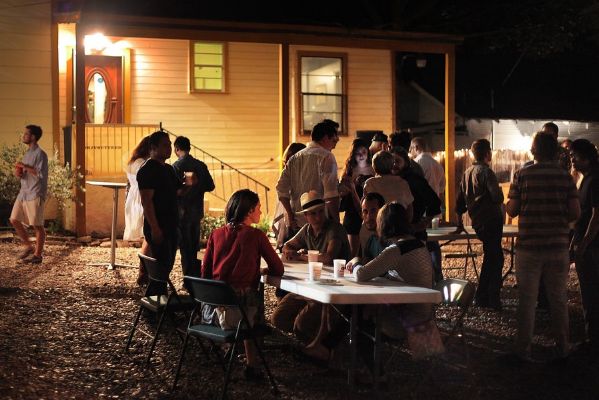 The power of serendipity

There is some inevitable serendipity when working in coworking. It doesn’t matter if both parts are in different continents. HWL team really believes in this power, so today we re-post an article from Drew Jones, anthropologist, workplace experience designer, and founding partner of the OpenWork Agency in Austin.

The following article is an x-ray of what coworking really is (for us), how has evolved and its direct impact in the way we work.

Coworking is not only about space. It is about a way of working

Those of us in the coworking industry love to celebrate the fact that coworking has become a $26B/yr industry with over 35,000 coworking spaces operating worldwide. That has indeed been a remarkable achievement. From humble origins at the Spiral Muse in San Francisco in 2005 to a mainstream feature of the global officing industry, ‘we’ve come a long way baby.’

Yet, because of the way that the industry developed, and particularly the way it has been funded, coworking’s true impact on the world of work remains largely hidden from view. In the main, coworking is a subset of the real estate industry and is essentially a rent-arbitrage business model. Operators pay X amount per month to lease a space, they charge Y amount to members to use the space, and they collect the difference. Not the technical definition of arbitrage, but it is a helpful heuristic for understanding how the industry has evolved over the past 15 years.

What we are missing

In its original iteration coworking was only secondarily concerned with real estate. Yes, an individual or a group had to qualify for a lease (which was not easy in the early years), so that was always part of the equation. But more than that, coworking represented a new way of working. Initially taken up largely by freelancers, coworking spaces provided places for individuals and small businesses to office around other people in a community-oriented environment. It enabled solopreneurs to get out of their house/apartment to go to an office and have social interaction with other humans. There was something about this basic concept that worked.

Despite the significant challenges that early coworking entrepreneurs faced with respect to qualifying for leases with tradition-minded asset owners and brokers, coworking caught on and we can see the results of that momentum today. That most improbable of stories is what captivated the imagination of journalists, who wrote about coworking with great enthusiasm in the early years. Many people caught the coworking bug!

I am not interested, though, in romantically harking back to coworking 1.0 where the ‘movement’ was defined largely by freelancers and small businesses. I am interested in the here and now and tomorrow. As most close observers of the industry know, coworking is being increasingly utilized by employees of large firms. A recent article on WeWork suggests that in 2020 around 65% of new customers are large enterprises. This is being mirrored by other operators as well. That is, what started out as a local, community-focused shared office solution for freelancers has ‘jumped the fence’ and is now an everyday feature of the broader office environment for companies around the world.

The mainstreaming of remote work, autonomy, and trust

While operators, landlords and brokers were business doing the math on how the business model would work, individual corporate employees lucked into working at various coworking spaces around the world. Like their freelance counterparts before them, they became coworkers.

For some first generation coworking entrepreneurs, the notion that corporate employees working inside private offices (rather than in open workspaces) was actually ‘coworking,’ was questionable. Real coworking, the thinking was, is done out in the open at open tables and desks. Thus the ‘co.’

However, for a corporate employee who no longer went to HQ everyday, this was a significant break in routine. With it came a new-found freedom from much of the undesirable stuff that goes down at the office- office politics, gossip, line of sight management and micromanaging managers, power trips, discrimination, among other things. While not perfect by any means, freedom from the power and authority that permeates corporate offices was liberating in its own right.

Another hallmark of coworking is the fact that, for the most part, members come and go according to their own rhythms and schedules. This was more so the case among freelancers that have no bosses, but from first hand experience over many years, we have witnessed the casual flow of corporate members in and out of coworking spaces at all times of the day. One of the unwritten norms of coworking- freelancer or corporate- is an acknowledgement of choice. People tend to come in to the space some of the time, but not all of the time. It’s all a matter of choice.

Some firms do indeed regulate their coworking employees more than others, but in practice this is hard to do. To the extent that most managers are likely back at HQ and the individual teams are working together at an office at the coworking space, policing ‘presence’ isn’t very practicable. Part of the drill is that the team will self regulate their working routine at the space. Again, in terms of representing a ‘new way of working,’ this liberates corporate coworking teams from the Panopticon gaze of managers who don’t trust their people.

Which brings us to trust. What might have started out as a real estate decision, for example having a team work out of a coworking space while a new office is being readied, inadvertently introduces trust into management practices in new ways. It may not have started out with this intention, but when a corporate team is ‘set free’ to do its work at a coworking space, it is on the receiving end of trust in ways that for many companies are quite new.

Over time, as more teams from a given company find themselves working out of coworking offices, seeds of trust are spread throughout the company. Younger employees, particularly, then want to work away from HQ so that they can work free of micro-management too. Meanwhile, back at HQ employees are dealing with the same toxic corporate rituals and power plays that keep employee engagement levels at 30% year after year. Over time, trust shifts from being a perk to a hygiene factor, and expectations also slowly shift over time. At some point the cat is out of the bag, and there is no going back.

For most companies Covid-19 was a full-on crisis. Few firms were prepared for 100% remote work for months and months. For those companies that had already adapted to coworking as a form of remote work, the shock was probably considerably less acute. Those companies (and employees) were already working in multiple locations and were already using (available) technology to stay connected in ways that worked for them. They were, to a certain extent, pre-adapted to the effects of Covid.

Of course the real estate dimensions of corporate coworking remain intact, and there is a whole separate discussion to have about the economics of that. Costs aside, the flexibility that coworking memberships provide companies in terms of speed, scaling up and down, etc, will likely keep coworking competitive for some time to come. But I am interested in the other dimensions of coworking here.

What we do know, though, is that coworking as a way of working is precisely what many companies must learn to do now. How to go about developing a hybrid workplace strategy where employees and teams are working in different locations (at the office, at home, or at a coworking space) on an ongoing basis? Companies that were doing this before Covid already kind of know what to do. Companies that have not embraced coworking (defined here as the way of working I am describing here) can learn a lot from coworking.

At the heart of both a coworking working approach and a flexible working culture (to adapt to a post-Covid environment), are the issues mentioned above- remote working, autonomy, choice, flexibility, and trust. This is what has defined coworking from the outset, and what will define effective hybrid working strategies in the future. To get to this point, companies will need to learn to see coworking spaces as more than just space.

Does your company need help to embrace flexible work?

We can help your company throughout this transformative process by integrating coworking into your company strategy. By embodying the core values of coworking our clients have seen a huge increase in productivity, retention and attraction of talent, as well as open innovation across their organizations. For more info about this service, Get in touch.